Just last week we were shaking our heads in frustration and wondering what the deal was with the government, the courts and emergency contraception.

We wrote a whole post about how disappointed and confused we were that restrictions continued on emergency contraceptive access.

We even created a set of graphics to display the “games” we saw being played with emergency contraceptives – and how women were clearly set up to constantly lose. 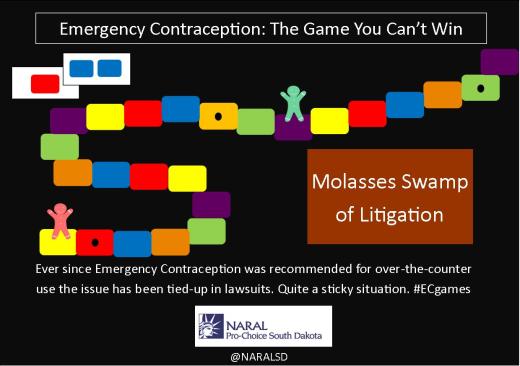 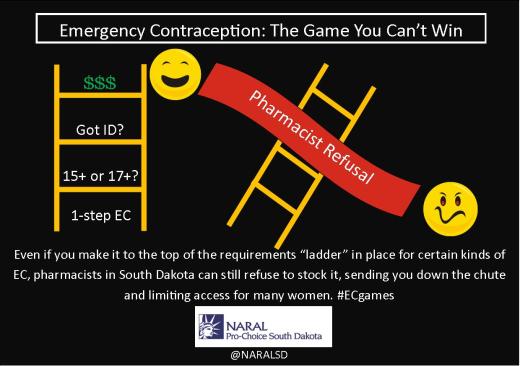 But this week, (we think partially in response to our clever graphics, of course) the Obama administration decided to stop blocking the over-the-counter sale of emergency contraceptives to women and girls. This means that the Food and Drug Administration will comply with Judge Edward Korman’s ruling that emergency contraceptives be accessible without a prescription and without age restrictions or proof of age.

Plan B One Step will now be available over-the-counter without age restrictions, and its generic counterparts are likely to apply for the same approval. Two-pill forms of emergency contraceptives will still fall under restrictions, due to concerns that young girls might struggle to understand dosage directions.

**In South Dakota all of this could make no difference if your pharmacist refuses to distribute emergency contraception, which they can do under current state law.

For help dealing with this, look for a copy of our recently updated Emergency Contraception Pamphlet for information on which pharmacies do carry emergency contraception in the state. Or request one by emailing us at jenny@prochoicesd.org.

As many of you may have heard, the world of emergency contraception (EC) access is getting rather complicated. We’re going to do our best to break it down for you. Hold on to your hats, campers.

In the beginning, the Food and Drug Administration (FDA) made a recommendation that emergency contraceptives should be sold over the counter, without restrictions. But then the Secretary of Health and Human Services Kathleen Sebelius overturned that recommendation (something that had never been done before), retracting the FDA’s support of universal access to EC.

Then along came Judge Edward R. Korman (he’s awesome) who made a ruling in April that all emergency contraceptives should be available over-the-counter, without restrictions – just like the original recommendation from the FDA.

He said let there be access, and it was good. But the FDA no longer supported the unrestricted access.

So then the FDA, under the orders of the administration, appealed the decision by Judge Korman, and the issue was sent to the next level of the courts, the 2nd U.S. Circuit Court of Appeals.

So that’s how the issue of emergency contraception access ended up at the 2nd U.S. Court of Appeals.

Now this past Wednesday, the 2nd U.S. Circuit Court of Appeals in Manhattan made a ruling on some forms of emergency contraceptives, determining that they be available over the counter immediately and without restrictions.

So that’s the good news – but unfortunately, it gets further complicated from there.

Seriously, prepare to be confused.

Amid the ongoing drama from the FDA, Secretary Sebelius and the courts, the current status of emergency contraceptives access is as follows:

The 2nd Circuit Court of Appeals has permitted two-pill versions of emergency contraception to be sold over the counter, without restrictions. That includes the original Plan B and any generic two-pill forms of contraception.

Now, as for Plan B One Step, which mirrors the effects of the original two-pill Plan B except in a convenient one-pill dosage, it still remains in the limbo of the appeals court and remains available only for women ages 15 and older who can prove their age with an official form of ID. Which is problematic, since many states don’t issue learner’s permits or driver’s licenses until age 16. So they’re asking for forms of ID that many young girls won’t have access to, making it so they then can’t access the emergency contraception.

Every other generic form of emergency contraception that involves only one pill is available over the counter to women 17 and older who can prove their age with an official form of ID.

It is yet unclear why the different pill forms have been distinguished from each other, since they offer the exact same result, just in fewer steps. Although, obviously simplicity in access is not an underlying goal here.

In summary, as of Wednesday emergency contraception access is as follows:

BUT the federal administration (cough, Secretary Sebelius, cough) has two weeks from yesterday to  decide whether it will appeal the two-pill ruling (keep in mind that they are still currently in the appeals process for the one-pill forms). If the FDA does additionally appeal the two-pill ruling then it will go to either a full review by the 2nd Circuit Court or directly to the Supreme Court.

Of course, in South Dakota all of this could make no difference if your pharmacist refuses to distribute emergency contraception, which they can do under current state law.

For help dealing with that, look for a copy of our recently updated Emergency Contraception Pamphlet for information on which pharmacies do carry emergency contraception in the state. Or request one by emailing us at jenny@prochoicesd.org.

A federal judge – Judge Korman – made a ruling last month that called on the Food and Drug Administration (FDA) to make emergency contraceptives available over the counter with no age restrictions. But so far the Department of Health and Human Services and the FDA have only partially implemented this ruling – pharmacies may now sell emergency contraceptives without a prescription to women as young as 15 years old, but only if they can prove their age.

And as you read that you’re thinking, “Well, proving your age is easy, right?” Think again – because for some women it’s not.

“This compromise doesn’t address the reality that not every woman has a photo ID – especially women in urban areas who may not drive and women age 15 and 16,” the President of NARAL Pro-Choice America Ilyse Hogue said about the decision.

While some 15-year-olds might have a learner’s permit already, there are 16 states that limit learning permits to those older than 15. Without a driver’s license or learner’s permit, women can use either a passport or birth certificate to verify their age. However, for young women still living at home, it is likely that these important documents are filed away in a desk or fire-safe box – which may or may not be locked or easily accessible. So this lowering of the age restriction to 15 for over-the-counter access to emergency contraceptives becomes only as helpful as the reality of the access.

All the while, the clock is ticking on the 72 hours or less that it takes in order for Plan B to be effective. There just isn’t enough time to scramble for any of these documents.

The Administration’s challenges, previously to the FDA and now to a federal judge, are simply putting politics over science. Their hesitation to implement these rulings is seemingly based in discomfort – an unwillingness to acknowledge that teenage girls as young as 15 years old might be having sexual experiences. Similarly, making contraceptives accessible over the counter would relinquish a level of control and familiarity that they’re using as a crutch.

We need to protect the rights of young women to access emergency contraceptives so that they don’t end up with unintended pregnancies at ages when they have barely grown up themselves.  It’s simple, the proof-of-age requirement leaves in place barriers that still restrict women. It robs them of bodily autonomy. It sets a standard that sexual behavior is worthy of punishment or, at the very least, the loss of dignity.

But even if the proof-of-age restriction was eliminated, the question remains of why Plan B, along with other forms of contraceptives, shouldn’t be available as over-the-counter drugs to women and girls of all ages. The reality is that there is no reason why they shouldn’t be over-the-counter, readily available drugs.

In 2011 the FDA determined that, based on scientific evidence, that morning-after pills were safe for “all females of child-bearing potential.” And last December the American College of Obstetricians and Gynecologists deemed that it was time to make non-emergency birth-control pills readily available on pharmacy shelves, without a prescription.

As drugs, birth control pills pose no greater risk than pain pills or decongestants to health – and we trust women to handle their own stuffy noses and sore throats. Contraceptives are especially safe now, with birth control pills containing lower doses of estrogen than when they first became available in the United States more than 50 years ago.

It may be  hard to imagine a world where birth control pills are sitting on the shelf next to the cough syrup and Tylenol, but just because the concept is unfamiliar does not mean that isn’t the right direction to move in. If we change the way we think about access and we make the choice to prioritize it, then we as a society can empower women, and undoubtedly affect the rate of unintended pregnancies in the country.

What’s more, establishing contraceptives as over-the-counter drugs would eliminate so many discrimination lines created by the current access standards – those of economic status, geographic location, age, race and circumstance. It would also ease the stigma about women taking control of their reproductive health. Because empowering women undoubtedly benefits everyone.